New York and Austin-based installation artist Laurie Frick recently gave a talk at Pratt (where I study library & information science) entitled "The Art of Self-Surveillance" (here's a storify of some tweets about the talk). Though unfortunately I wasn't able to attend, I was intrigued by her use of "self-tracking" about things like mood, sleep patterns, and movement. 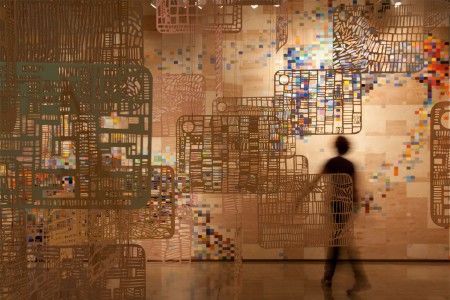 Not as literal as an infographic, which might combine image and text, Frick's work brings out patterns of activity and makes them meaningful, translating abstract numbers into her own visual language. Beyond simply creating beautiful visualizations, the thoroughness of her work invites contemplation of issues of privacy, surveillance (by ourselves and others), and how we form our senses of being and identity through interaction with digital technologies.

Back in February, Kate over at EdLab posted about Reporter, an app that polls users to collect interpretive data rather than the kind of sensor data collected by apps that track things like sleep. Even though sensor-collected data is a major source for her, Frick combines it with the more qualitative forms of data that Reporter taps into, which pushes her work deep into personal, human territory. Though she often uses herself as a subject (like in her series Moodjam, in which she uses the app to track her moods on a given day or during an event), Frick has also worked with organizations and non-self-referential sets of data--for example, 30 days of chat room metadata, an installation in a company's lobby using metadata about employees' chatroom use, and 7 stages, 6 categories, 264 ALS patients, built for the Carolinas Medical Center to visualize stages of Lou Gehrig's disease (amyotrophic lateral sclerosis).

Some of my favorite moments are when bits of otherwise neat and orderly arrangements begin to fall apart and tumble in various directions (like in Walking thru cardboard). I also find that, besides appealing to my aesthetic sense, the handmade quality of her work--the not quite regular rectangular shapes, the rounded corners of the wood blocks--makes the patterns softer and the data more digestible.

In her earlier series, like Continuous partial attention and Imagined time text, color, and image are assembled into stacks more reminiscent of books or documents than pixels, an interesting choice that makes me think of a chaotic, personal library collection (by which I may mean the floor of my bedroom).

Libraries--and teachers--engage in many different kinds of tracking, so I'm beginning to wonder what fascinating things Frick could do with library stats or measures of student progress. I'm sure it would be beautiful!

For more, check out the artist's 2013 TEDxAustin talk, Seeing the hidden language in art.

Posted in: Learning at the Library|By: Alexandra Provo|915 Reads