May 1 marks International Workers' Day, chosen in memory of the Haymarket Affair: a general strike petitioning for the eight hour day set in 1886, the ensuing police violence, and other workers' rallies that followed. With teachers of all levels going on strike around the nation and the world in a fight for fair treatment, this month comes as a reminder of what workers have won and what they have at stake in the future. The idea for this collection began when I came across a children's book about the Los Angeles janitor strike during my first year or so as a services associate. I then learned that a childhood friend's mother and TC alumna, Dr. Lois Weiner, has published extensively on unions in education. As an educator and a graduate student myself, it felt important to bring these books front and center while we continue to push for fairness in all fields. 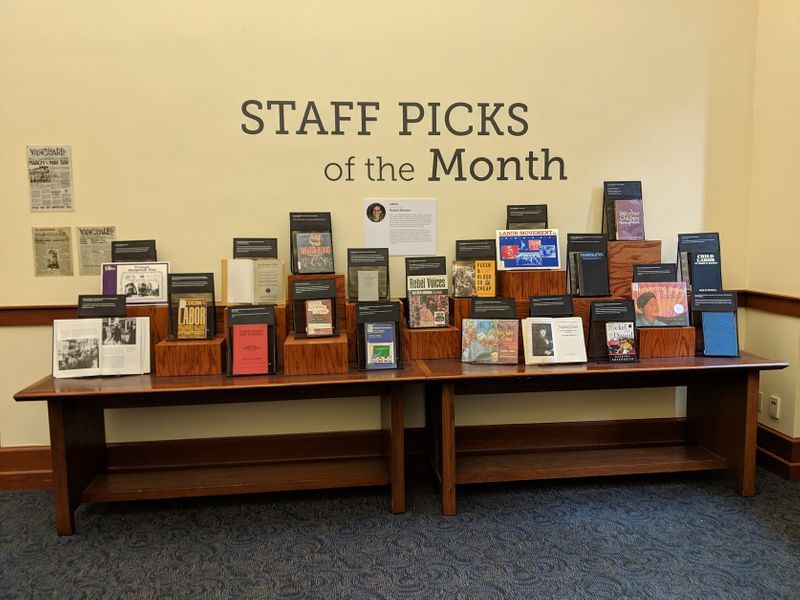 Teachers College has a long history with work and how it is done. From its "domestic arts" program to its student organizers, who published newspapers like the Education Vanguard and stood up for their right to organize on campus, there can be no mistaking the connections between education and the concept of labor as a whole. This has proven true time and time again, as evidenced by this list of strikes provided by Education Week. There are massive movements in higher education spearheaded by adjuncts and graduate workers; CUNY's 7k or Strike movement is still pressing on, and Columbia's own graduate student workers' union (GCW-UAW) has been in the bargaining stages since February, according to their Bargaining Blog. Of course, recent movements extend beyond education. In April, Stop & Shop Workers went on strike, while long-time Key Food employees were locked out by their employers. Rideshare drivers also staged a strike earlier this month. It just goes to show how many people it takes to make society run smoothly day to day, and how the people who do this also bear the brunt of inequality. Below, I have included a list of resources available through the Gottesman Libraries that help us paint a clearer picture of labor history. Many of these resources focus primarily on the United States, but encompasses many lines of undervalued work. If there are perspectives that are missing from our catalog, you can make a request for new material to be purchased or borrowed via interlibrary loan.

I took my sign down from the living room wall and walked out with her. That afternoon, we joined workers and marched up and down in front of the hotel. Mamá and I met lots of new friends. And together, we shouted, "SÍ, SE PUEDE!"

The Global Assault on Teaching, Teachers, and Their Unions: Stories for Resistance edited by Mary Compton and Lois Weiner

Teachers are in a war being fought over the future of education, and though at times it might seem as though we are losing the war without firing a shot, we have a potentially powerful weapon in our hands—our soilidarity and organization into powerful teacher unions.

Flesh & Blood So Cheap: The Triangle Fire and Its Legacy by Albert Martin

Curator's note: A comprehensive, vividly-illustrated history of the context, events, and aftermath of the Triangle Fire. Particular attention is paid to industry and immigration in New York City.

Curator's Note: A collection of primary sources for use in history curricula, or by anyone who is curious about the horrific events that transpired at the Triangle Company and their implications in the struggle for workers' rights.

Sweat and Blood: A History of U.S. Labor Unions by Gloria Skurzynski

Curator's note: A history chronicling labor in the United States from the 1600s to the 21st century.

Contemporary Capitalism and the Middle Classes by S.N. Nadel

In the present struggle against monopolies and imperialism and for peace, democratic and social progress, a special place must be given to the alliance of the working class and the middle sections in both the town and the countryside. The strengthening and widening of this unity is one of the most important tasks of the working-class movement.

Studies in a Dying Culture by Christopher Cauldwell [pseud.] with an introduction by John Strachey

Nickel and Dimed: On (Not) Getting By in America by Barbara Ehrenreich

Just bear in mind, when I stumble, that this is in fact the best-case scenario: a person with every advantage that ethnicity and education, health and motivation can confer attempting, in a time of exuberant prosperity, to survive in the economy's lowest depths.

This book, being about work, is, by its very nature, about violence.

Black women did not prefer service jobs. They had no choice but to take them.

Class, Race, and Worker Insurgency: The League of Revolutionary Black Workers by James A. Geschwender

Curator's note: A study on the rapid rise and decline of the League of Revolutionary Black Workers, a Black Marxist-Leninist group that framed Black workers in coal mines and auto plants as the "nucleus" of the struggle for workers' rights in America.

Mother Jones, the Most Dangerous Woman in America by Linda Atkinson

She was not intimidated by power or wealth, and called some of America's mightiest millionaires "pirates" and "high-class burglars."

A man gets thrice the money— But then a "man's a man, And a woman surely can't expect To earn as much as he can." - The Factory Girl by J.A. Phillips

May Day—It is one of the greatest ironies of history that a day originally marked by the American labor movement as a labor holiday in the United States should now be celebrated everywhere but the United States.

Curator's note: This anthology covers documentation of the I.W.W. over many decades and industries, across demographics and even behind bars. It contains the cartoons, songs, poems, essays, photographs, interviews, and miscellany that defined the movement.

Organizing the Curriculum: Perspectives on Teaching the US Labor Movement edited by Rob Linné, Leigh Benin, and Adrienne Sosin

How can educators teach student to think critically when they are reduced to being automatons?

The Keeney Case: Big Business, Higher Education, and Organized Labor by the American Federation of Teachers

Apart from the specific evidence and conclusions presented, the report raises certain general questions regarding the relationship between higher education, organized labor, and corporate and political interference in the university administration.

Gently he reminded everyone that the battle was not over: "It is well to remember there must be courage but also that in victory there must be humility."

We know that whatever impoverishes the working classes [...] exacerbates whatever child labor problems are already present.

A collection of primary sources for use in history curricula, or by anyone who is curious about the history of the labor movements in the US beginning in the early 1800s.

Voices from the Fields: Children of Migrant Farmworkers Tell Their Stories by S. Beth Atkin

Some of the children will find better lives than their parents. Others might continue to live their lives much as their parents have with little education, in inadequate living conditions, moving their homes and families frequently, and working in the fields.

Curator's note: Research compiled by the current president of Teachers College comparing the working situations of immigrant workers and other marginalized workers born in the US, including teens, women, and Black men. Dr. Bailey also works to dispel stereotypes about unskilled labor.

For We Are Sold, I and My People: Women and Industry in Mexico's Frontier by María Patricia Fernández-Kelly

Curator's note: A study exploring the lives and working conditions of maquiladoras.

Curator's note: A collection of research on women who leave their home countries for places with stronger labor economies to make ends meet, and analysis on the gendering of the work that they do.

A Long Hard Journey: The Story of the Pullman Porter by Patricia and Frederick McKissack

The Guilds of America by Henry Creange

The International Jewish Labor Bund After 1945: Toward a Global History by David Slucki (ebook)

Laboring and Dependent Classes in Colonial America, 1607-1783: Studies of the Economic, Educational, and Social Significance of Slaves, Servants, Apprentices and Poor Folk by Marcus Wilson Jernegan

Rights, Not Roses: Unions and the Rise of Working-Class Feminism, 1945-80 by Dennis A. Deslippe

Trade Organizations in Politics; or, Federalism in Cities by J. Bleecker Miller