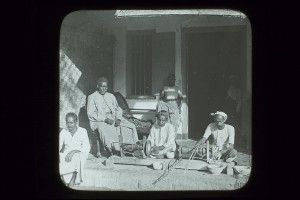 This picture from PocketKnowledge shows a traditional method of manually grinding gems in Ratnapur, Ceylon during the 1920s. While Ceylon was the old name given to Sri Lanka during the British colonial rule, the city of Ratnapur still retains its name along with its world renowned status as “The City of Gems”. The Arab travellers who visited Sri Lanka millennia ago called it Serendib (The Land of Rubies). The jewels of Serendib are rumored to have been the inspiration for fables like Sinbad and Arabian Nights. Mined in tradition Ratnapur is mountainous and mineral rich. The mining techniques here have remained mostly labour intensive for centuries, with very limited modern technology implemented. This is on purpose since this approach has low environmental impact and is more conducive to collecting precious stones without adversely affecting the local geology. Moving to large scale automated operations would potentially disturb the delicate ecological balance currently sustained through traditional methods.The district has over 200 working mines today, with several international players constantly competing to open more. Ratnapur also hosts the largest open-air gem market in Sri Lanka at its local clock tower square where hundreds of buyers and sellers of gems congregate early in the day. The merchants even have procedures set up to allow buyers to verify the authenticity of gemstones before completing their transactions. Verifiers include the government-run State Gem Corporation as well as government certified private gem valuation agencies. It is also possible to visit gem mines to dig and wash gravel containing gems, as well as lapidaries in the city to watch the process of cutting and polishing gems.   Claims to fame

The list of world famous stones from Ratnapur is never ending. The cornflower blue sapphire on Princess Diana’s engagement ring (currently owned by the Duchess of Cambridge, Catherine Middleton) is believed to have been procured from Ratnapur. In 2014, the Blue Belle of Asia that was originally mined at Ratnapur, became the most expensive sapphire ever sold at an auction (over 17 million dollars). The Star of India, on display at the American Museum of Natural History was the centrepiece of one of the most high-profile jewel heists in American history. The Star of Adam, the largest sapphire in the world at 1404.5 carats, also originated from Ratnapur. Sri Lanka remains one of the largest gem exporters in the world. So it seems rightly warranted that Marco Polo in 1292 commented that Ceylon was the jewelry box of the Indian Ocean. Sri Lanka’s claim to fame is not limited to just one city, with several other regions also rich in precious stones. The area of Meetiyagoda is one of the primary sources of Moonstones in the world. Just like Ratnapur, the mining methods here remain mostly traditional, with limited tech employed. As can be seen below, the manual grinding of moonstones in Sri Lanka was also documented and archived in PocketKnowledge. This picture is from Kandy, the second largest city in Sri Lanka after Colombo. Kandy is most famous for its Temple of the Sacred Tooth. The temple contains Sri Lanka’s most important Buddhist relic, Buddha’s tooth. Kandy is also known to be the cultural capital of Sri Lanka.

Along with the glittering jewels mined from the earth, Sri Lanka is home to breathtaking natural beauty and incredible local fresh food. Unsurprisingly, it is a prime tourist destination. This is advantageous, since the gem and tourism industry are central to its economic development. Hopefully, with sustainable planning and implementation of its long term economic growth policies, Sri Lanka will once again return to its glory days of being a vital checkpoint in the ancient Silk Road.

Visit PocketKnowledge to dig through the archives and unearth more priceless finds.
Posted in: Learning at the Library, Archives|By: Paul Mathew|1012 Reads