Paul Mathew
May 08 2019 - 01:08 PM
Share
Archive Deep Dive: Yerkes - A Glimpse of the Stars
Have you ever wondered what the Sun looks like when it’s viewed straight on? Well here it is: 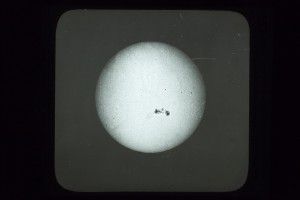 This picture from the early 1900s was made possible by a method of observing elements in the sun using spectrology. American astronomer (and University of Chicago professor) George Ellery Hale was instrumental in creating the spectroheliograph at Yerkes Observatory, using the largest refractor telescope in the world. In March 2018, the University of Chicago, which has maintained and run the Yerkes Observatory since it started functioning in 1897, announced its plans to wind down its operations. The 120+ year old observatory was being kept open as an educational center for both students and the public, but the prohibitive maintenance costs were proving too high. Origin Yerkes Observatory contains a 40-inch refracting lens telescope that was built during the 1890s thanks to a generous grant from Charles Yerkes, a businessman from Chicago. Professor Hale convinced Yerkes that building a telescope that could incorporate sufficiently large refractive lenses would help study previously unobservable galactic phenomena. Yerkes funded the project due to its potential prominence, but gifted the facility to the University of Chicago to maintain and use, following completion of construction. Typically, observatories work best when isolated from urban areas to avoid light and dust pollution since telescope observations are easily distorted. This why mountaintops and deserts are prime spots to set up large telescopes. This is also why the Hubble Telescope was deployed to operate in outer space without interference from the Earth’s atmosphere. Its captured images would be less prone to distortion than telescopes mounted on the planet’s surface. But one of the few stipulations imposed by Yerkes was that the observatory needed to be built within 100 miles of Chicago. Thus, the facility rests 98 miles away in Williams Bay, Wisconsin. One massive telescope After assembling the 2 large polished lenses into its 60 foot-long prefabricated body, the Yerkes 40-inch telescope weighed about 6 tons. When mounted on operating machinery and gears to assist rotational and directional movement of the telescope, the whole apparatus weighed close to 20 tons. The entire floor on which the telescope is mounted is technically an elevator that can be mechanically moved up or down to help users reach the viewing lens of the telescope depending on telescope positioning. Due to the clearances and openings required for the telescope, it is housed under one of the largest movable domes in the world. The engineering and design lavished on the telescope, facilities, and the lavish grounds is incredible, especially considering it was built well over a century ago. By the time of completion, the 40-inch Yerkes observatory telescope became the largest refractor in the world surpassing the 36-inch Lick observatory telescope. It is interesting to note that both observatories had lenses produced by the same lens-maker, Alvin Clark & Sons. The existence of both observatories were also made possible by businessmen individually persuaded by researchers to fund the building of potentially the largest refracting telescope in the world.

Day and night tours were available at Yerkes until September 2018.

Scientific contributions The Yerkes Observatory attracted talented individuals from across the world due to its research potential and fame. Astronomers like Subrahmanyan Chandrasekar who formulated the Chandrasekar Limit at the age of 20 and later won the Nobel Prize for Physics in 1983 conducted research at Yerkes. Edwin P. Hubble (after whom the Hubble Telescope is named) conducted graduate work at Yerkes, which helped him lay the foundation for measuring the size of the universe. By the 1940s, astronomer Gerard Kuiper (considered the father of modern planetary science) discovered and studied the existence of 2 new natural satellites in our solar system. Later, the Kuiper Belt was named in honor of his theory about its existence. He was also dissertation advisor to Carl Sagan who worked on his thesis project at Yerkes. Einstein reportedly spent a whole day at Yerkes during his first trip to the US. There have been several other equally reputed personalities associated with Yerkes such as Gerhard Herzberg (1971 Nobel Prize for Chemistry winner), E.E. Barnard, Otto Struve, etc. The quality of work carried out here is evident from archived letters between Hubble and Struve. With the Yerkes telescope, researchers could observe changes in star positions for the first time and thereby calculate their distances from Earth using the Parallax method. To date, trigonometric and geometric parallax calculations are commonly used to map and calculate cosmic distances in astronomy.

Celebrating a legacy The Yerkes Observatory heralded the age of modern astrophysics and is among the most famous outer space observatories built before the 1900s. It allowed scientists to observe and document space in a manner that had never been possible before. Unfortunately, it was built around a time when scientists started favoring reflector instead of refractor telescopes. Due to the increase in computing and telescoping power, refracting telescopes were proving inefficient in elevating research in the sector. It should be noted that officials made special mention that the closure of the Observatory is a temporary measure and that next steps are still being determined. The last post on the dedicated Yerkes Updates page was in November 2018. Hopefully Yerkes will reopen sooner rather than later to continue inspiring generations of future scientists. Until then, you might try stargazing over on PocketKnowledge with the Yerkes Observatory collection, a series of revolutionary pictures taken by the Yerkes telescope in the early 1900s.
Posted in: Learning at the Library, Archives|By: Paul Mathew|1206 Reads