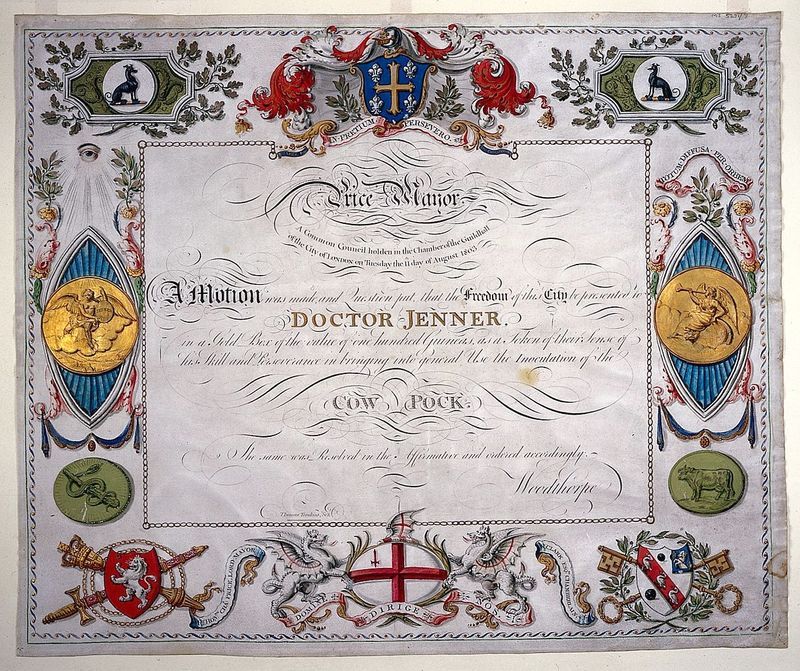 The skepticism that appeared, even among the most enlightened of medical men when my sentiments on the important subject of cow-pox were first promulgated, was highly laudable. To have admitted the truth of the doctrine, at once so novel and so unlike any thing that ever appeared in the annals of medicine, without the test of the most rigid scrutiny, would have bordered upon temerity. -- Edward Jenner (1749-1823), A Continuation of Facts and Observations Relative to the Variolae Vaccinae, or Cow-Pox, from Familiar Medical Quotations

On May 14th, 1798, an English country doctor by the name of Edward Jenner tried an innovative technique. Inspired by the curious blisters on a cow's udders and resistance to disease by local milkmaids, Dr. Jenner took fluid from the blister and rubbed it into a scratch on a young boy to test his immunity. Though a blister quickly appeared, the boy recovered, only to be injected weeks later with a small amount of the fluid -- proving no further spread of disease. While cowpox was not smallpox -- the latter being a disfiguring and often deadly disease that began roughly 10,000 BC and killed millions worldwide, Jenner's work set the stage for vaccination, or administration of small amounts or weakened forms of virus, to prevent infectious disease.

In the following centuries, vaccines were developed for polio, measles, tetanus, whooping cough, hepatitus B, yellow fever, and in recent months, COVID-19.