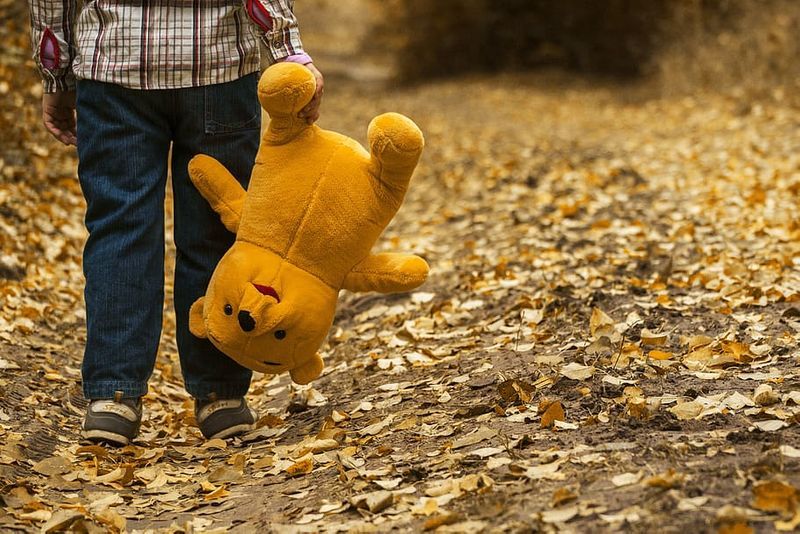 Here is Edward Bear, coming downstairs now, bump, bump, bump, on the back of his head, behind Christopher Robin. It is, as far as he knows, the only way coming downstairs, but sometimes he feels that there really is another way, if only he could stop bumping for a moment and think of it. And then he feels that perhaps there isn't. Anyhow, here he is at the bottom, and ready to be introduced to you. Winnie-the-Pooh.

Did you know that on October 14th, 1926, British author A.A. Milne published Winnie-the-Pooh, a collection of children's stories, with inspiration drawn from his young son, Christopher Robin, and his beloved animal toys -- among them, a honey-loving golden teddy bear, named Pooh; sad gray donkey, Eeyore; lively, motherly kangaroo, Kanga; shy little pig, Piglet; and bouncy, energetic tiger, Tigger? These characters live in the forest surrounding Hundred Acre Wood, with master Christopher Robin close by. This young boy brings sensible solutions to life's everyday predicaments: getting trapped in trees (in pursuit of honey); stuck in doorways (eating too much honey); or caught in rising rivers (tempting the forces of nature).

Winnie-the-Pooh came to literary book life, thanks to the publisher of Milne's earlier children's work, Methuen, in England; E. P. Dutton in the United States; and McClelland & Stewart in Canada. The first Pooh bear story was published in The Evening News, a London newspaper, on Christmas Eve, 1925, with illustrations by J.H. Dowd, and it later was serialized the Boston Daily Globe, with famous illustrations by E.H. Shepherd -- many based on Ashdown Forest in East Sussex, England.

A classic work of children's fiction, which includes silly poems, Winnie the Pooh has been adapted to screen and stage, and remains a favorite among younger and older readers -- offering insightful, often humorous insight into human behavior. Held in the Schwarzman Building, Gottesman Hall, the New York Public Library, the self-described "Bear of Very Little Brain" and his stuffed animal friends (apart from Roo, Kanga's long lost baby) are iconic symbols of childhood, love, and learning.