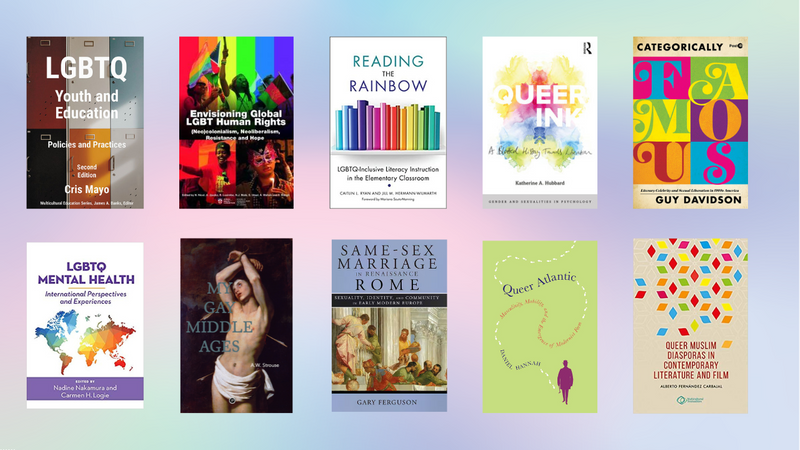 This June to celebrate Pride Month, we are featuring 10 books at Gottesman Libraries in Queer and LGBTQ+ studies published in the last 5 years. This recent collection spanning topics including history, psychology, media studies, politics, and education represents the possibilities in research and learning continuing to develop in the discipline. Click through the title of each book to find the entry in Educat+ and explore access options. We plan to continually expand our collection of scholarship on Queer and LGBTQ+ studies to support inclusive advancement and innovation in education, health, and psychology.

LGBTQ Youth and Education: Policies and Practices by Cris Mayo

"An examination of the pedagogical, curricular, and policy changes that can improve school experiences for LGBTQ (lesbian, gay, bisexual, transgender, queer) and ally students."

"It is a book for activists and academics in a range of disciplines from postcolonial and sexualities studies to filmmaking, as well as for policy-makers and practitioners committed to envisioning, and working for, a better future."

"The authors show how expanding the English language arts curriculum to include representations of LGBTQ people and themes will benefit all students, allowing them to participate in a truly inclusive classroom."

Queer Ink: A Blotted History towards Liberation by Katherine A. Hubbard

"By tracing the lives and actions of women who used, were tested with, or influenced by, the Rorschach, a new kind of understanding of gay and lesbian history in Britain is revealed. Pushing at the borders between Psychology, Sociology, and activism, the book utilises the Rorschach to show how influential the social world is on scientific practice."

"The first sustained study of the relations between literary celebrity and queer sexuality, Categorically Famous looks at the careers of three celebrity writers—James Baldwin, Susan Sontag, and Gore Vidal—in relation to the gay and lesbian liberation movement of the 1960s."

"Chapters in this book cover LGBTQ populations that are largely invisible in the psychological literature by focusing on the Majority World to expand our understanding of what it means to be LGBTQ and how mental health needs and priorities contextually vary. "

"Strouse experiences medieval literature and philosophy as a part of his everyday life, and in these prose poems he makes the case for regarding the Middle Ages as a kind of technology of self-preservation, a posture through which to spiritualize the petty indignities of modern urban life."

"Same-sex marriage is a hotly debated topic in the United States, and the world, today. From the tenor of most discussions, however, it would be easy to conclude that the idea of marriage between two people of the same sex is a uniquely contemporary phenomenon. Not so, argues Gary Ferguson in this book centered around a same-sex wedding ceremony in 16th-century Rome."

Queer Atlantic: Masculinity, Mobility, and the Emergence of Modernist Form by Daniel Hannah

"Bringing together a variety of contemporary writers and filmmakers of Muslim heritage engaged in vindicating same-sex desire, the book approaches queer Muslims in the diaspora as figures forced to negotiate their identities according to the expectations of the West and of their migrant Muslim communities."

Posted in: Learning at the Library|By: Becca Gates|250 Reads